What to read, what to watch in SciFi and Fantasy

It’s June, with longer days, warmer weather, and a lot of gardening to catch up on. The fireflies have started their nightly shows; they’re booked to continue until the first week of July, at least. Oddly, we saw fireflies several weeks ago, on the night of the lunar eclipse. That’s nearly three weeks before their usual appearance. There were just a few, and only that one night. A special engagement, perhaps?

A pair of ospreys 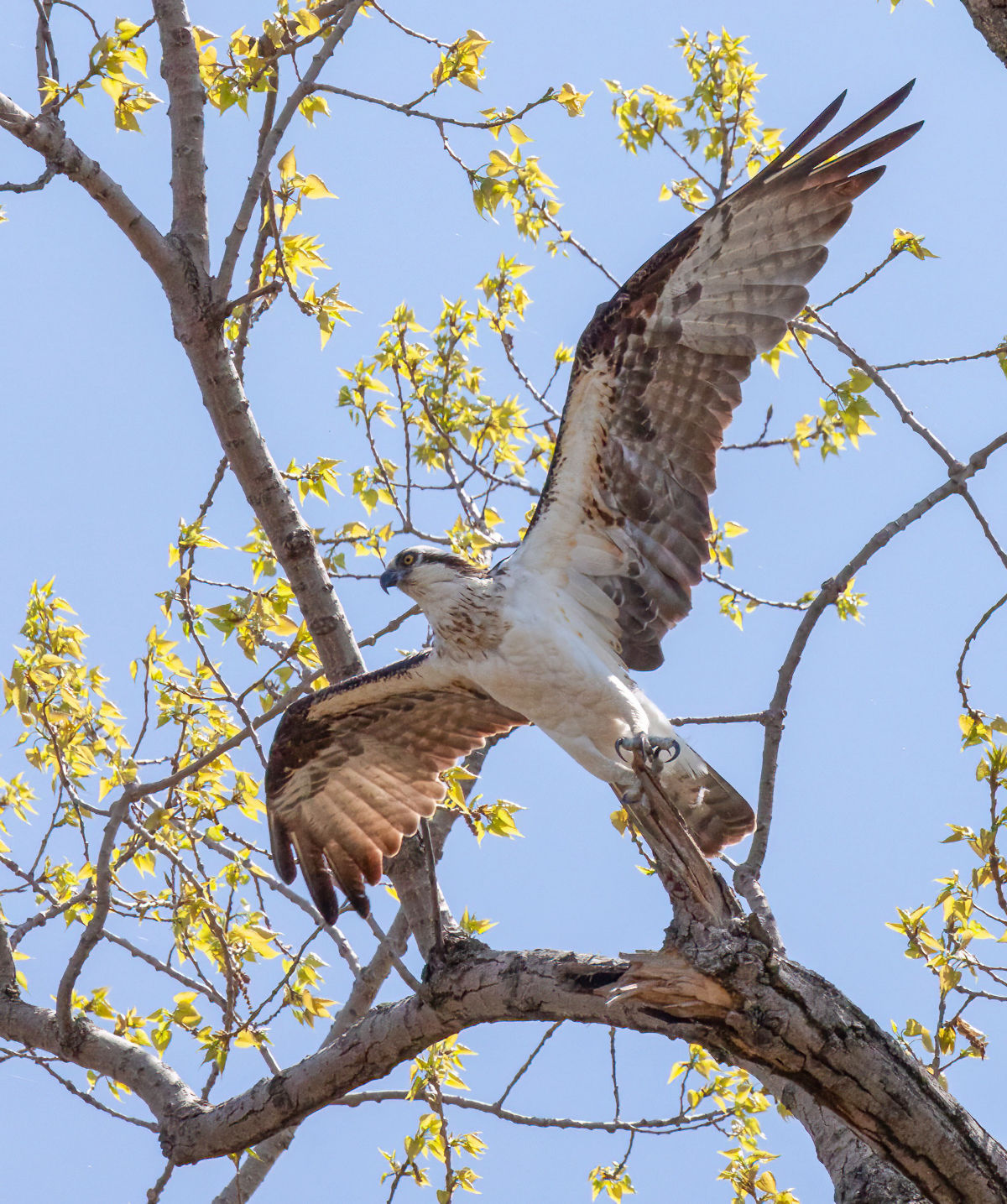 come to nest near the house every year, raise a couple of chicks, and fish in the lake. The fishing must be good, since I see them carrying good-sized trout back to the nest with great regularity. The populations of both ospreys and bald eagles has boomed in recent years, which has been fine to see. Here’s a picture I captured of one of the pair setting off for a fishing run (click for a full-size image).

On TV, the run of Picard wrapped up in a mostly satisfying way. Most of the characters found resolutions to their arcs, and if there was any deus ex machina about it, at least the deus was sitting there in plain sight for the entire season. I only felt that the final threat came out of nowhere, and just a little more foreshadowing could have made it feel less like a afterthought. We’re enjoying Strange New Worlds so far. The return to more independent episodes, rather than season-long plotlines, frees them up to tell a more interesting variety of stories. The characters are solid, though there are a couple who they’ve reinterpreted rather radically. I would just have soon have them be new characters than try to wrap my head around how the person they portray now becomes the person we know from the original series.

Stories are repeated. They evolve. They are cross-bred and spliced. Ideas take on a life of their own. The oldest legends appear in the latest retellings. One day, by design or accident, it had to happen…

You shouldn’t read this. Don’t say I didn’t warn you.

Monsieur Resche is an art thief. He has crossed a bridge into a quaint town that disappeared from Switzerland four centuries ago. All the magic that our world once had has ended up there. A precisely tied knot, an exactly folded paper, or a cunningly drawn figure can unlock wonders and horrors.

Resche has a mind that lets him excel at this new craft, but that brings him to the notice of powerful mages who play a great game of geomancy with tiles the size of countries. And when he looks for the bridge back to Geneva, it is nowhere to be found.

The Fractalist priest offers aid that may not be what it appears, the Jeweler has intricate schemes, the newspaper editor has taken an interest, the Astromancer had good advice before she was murdered, and Resche’s cat just makes wisecracks.

Have Kindle Unlimited? Read Knots for free on Amazon!

A Wizard's Guide to Defensive Baking

I haven’t had this much fun with a book since the last Terry Pratchett novel I read.

Mona is a wizard who works in a bakery. Her one skill is to get bread dough to do what she wants. But when the city comes under attack and almost all the other wizards are assassinated, Mona rises to the challenge.

With smart, slightly dark writing, witty characters, and a homicidal sourdough starter, this is a joy from start to finish.

This is a return to Parker’s world of Adepts and Demons. Demons possess people to torment them, or to compel them to commit evil acts that harm others. Adepts cast them out and foil their plans. Neither side will admit that this arrangement is mutually beneficial. The narrator, an Adept, had come to that realization on a personal level: a particular Demon and he have developed a working relationship. A favor here, a favor there. Maybe a little respect. Until a mysterious woman from a mythical country arrives to capture a Demon to use for her own purposes. There’s suddenly much more at stake than the status quo.

Parker’s writing is always witty, and this is among his best. It’s a fun social satire about the realities behind the labels “good” and “evil.” And what the *real* goals of the players on both side might be. (You can read the books in this loose series in any order.)

The Devil You Know

The book is full of Parker’s biting humor and signature tricksy protagonist. If Saloninus seems full of himself and too good to be true, remember that he’s the ultimate unreliable narrator – a playwright. In his own words, “I can write the most profound things without actually meaning them. I can persuade people of things I don’t believe myself, or (more usually) simply don’t care about.”

Amazon and Goodreads disagree on the order of the series of three novellas that this is part of, but it doesn’t matter. They’re all quite independent.

When Senator Todd Bembridge campaigned against the Rights of Magical Persons Act, every Witch, Vampire, Faerie and “Other” on the census developed a motive for murder. Too bad Astrid Stone is paid to keep him alive.

As an Agent of the Corpus Christi, Texas branch of Terrestrial Affairs, she’s used to handling trouble. After a week of networking vampires to rehabs and soothing angry ghosts, standing between a politician and his magical stalker feels almost like a vacation. She didn’t vote for the guy, but she’ll keep him breathing. Especially when the detail comes with distractingly interesting FBI Agent David Acton.

But then the stalker makes their move. Now Astrid, David and Bembridge are trapped in a ritualistic game to the death, and the stakes are higher than anyone can imagine. Separated from her team, Astrid must out-think a desperate mage before all of Corpus Christi pays the price. Everything’s riding on…STONE’S THROW.

Forced into a risky mission to the outer reaches of the solar system, Roxanne “Rox” Weaver is about to confront a horror from her past, and a threat to humanity’s future.